Tanzania is a multicultural nation and is home to many tribes and several different religions. Thanks to this mingling and mixing of cultures, with most of the population being Muslim and Christians, Sikhs, Hindus and other tribes making up the rest, there are plenty of holidays and diverse festivals to enjoy, and in which the country takes great pride. The people of Tanzania respect religious differences, enjoying several key celebrations including Christmas, Eid-ul-Fitr, Diwali and Navratri.

One of the most magical times to visit Dar es Salaam, the largest city in Tanzania, is Christmas, when offices and malls are beautifully decorated with Christmas trees and lights. Catholics make up most of Dar es Salaam’s Christian population, and so the Catholic church in the city is especially decorated for the holiday season with votive candles and flowers. There is even a midnight mass held on Christmas Eve. In the city’s many restaurants, it is possible to enjoy traditional wine tastings and Christmas buffets with delicious desserts such as puddings, gingerbread and cakes. During the Christmas holiday period, locals enjoy many evening events such as amusement parks, theater shows, and musical gatherings which have been arranged by local community organisations.

Although the actual dates of Eid ul-Fitr will depend on the new moon’s appearance, this Muslim festival is held to break the fast at the end of Ramadhan, the holy month. For the whole 29 or 30 days of the lunar cycle, Muslims do not drink or eat from dawn to dusk, and therefore, the 2 day Eid celebration marks the end of this process which includes the saying of prayers for protection, prosperity and forgiveness. Muslims go early on the morning of the 1st day of Eid to pray Namaz and they usually wear a new outfit and give money to the poor. Families will visit loved ones on the 2nd day, exchanging sweets and gifts.

Two holidays that are celebrated by the Indian community in Tanzania are Diwali and Navratri. Navratri is a Hindu festival held to worship the sacred living force, Shakti. This celebration includes dancing over 9 nights of praying, with each one coming after a day that has been devoted to one of the 9 forms of the divine mother goddess. Over 9 nights, Hindus ensure that a lamp is kept alight and they offer up prayers for prosperity, health and protection. The goddess’s nine forms are symbolic of typical human traits. Sometimes known as Deepavali, Diwali is the Hindu Festival of Lights which is celebrated throughout India, Singapore, Sri Lanka, Fiji, Nepal, Mauritius and elsewhere. Occurring between September and November according to the lunisolar Hindu calendar, this 5 day celebration rejoices in the triumph of good over evil, signifying the end of spiritual darkness. Through this key time, locals often put up decorations and lights in their homes and give each other sweets and gifts. 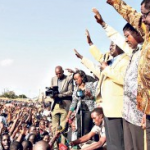 There are many other holidays which are celebrated by Tanzanians. Saba Saba day, for example, on July 7th is a commemoration of the Tanzanian political party’s foundation, and Nane Nane Day on 8th August is held to honor farmers in the country.